Authentic ecology as an advanced stage of technological civilization

People are right to want to live surrounded by vegetation, flowers and birds, to walk or ride a bike, to eat healthily with fresh, natural and local produce, to cherish nature, to banish stress, noise, traffic, pollution, exhaust fumes, plastic, pesticides, fine particles, endocrine disruptors, food additives, preservatives, etc. But they are also right to want to benefit from advanced medicine, to have children, to spend the weekend in a foreign city, to ski in the spring, to eat tropical fruit, to communicate at any time with hundreds of people on social networks, to watch movies on demand, to rave about the FIFA World Cup along with billions of others, to study abroad, to travel the world with a backpack, to live an even longer and healthier life, to escape into virtual reality, to enjoy ever greater comfort, choice and freedom, to constantly push the boundaries and explore the Universe.

Are people schizophrenic? Should they be ashamed to pursue these seemingly contradictory aspirations? Should they tame, stifle or even sacrifice these desires? We do not think so. The only real question is this: are an authentically ecological society and a prosperous, high-tech society – as is constantly claimed – two radically antagonistic projects? Not only is this not the case, but our thesis is that it is impossible to achieve ecological excellence if we reject technological innovation and the complex, globalized socio-economic model that underpins it. Reconciling points of view: the mistake made by some ecologists is to judge the Western way of life as being incompatible with the preservation of the environment; the point of view of some advocates of the free market is to think that this aspiration to a lifestyle of authentic ecological living leads to a necessary return to obscurantist times where one’s source of lighting was nothing more than a candle.

Far from being a regression, this authentic ecological society to which we aspire corresponds, in our opinion, to the most advanced stage of civilization. Indeed, it is empirically observed that ecological consciousness develops predominantly in prosperous and educated societies that have met their basic needs. They alone then have the technological and financial means to eradicate pollution inherent to industrialization, but without returning to the miserable standards of living experienced in the pre-industrial era.

We live exactly at this pivotal time. Our generation is faced with a choice: should we repudiate, as some suggest, our economic and technological model or should we, on the contrary, put this technology to use in the building of a genuinely ecological society? As we will see, the answer is obvious: to give up our model is to kill the economic and industrial engine needed to achieve an ecological transition. Moreover, no one wants to revive the way of life experienced by our ancestors when, in Western Europe, life expectancy was 33 years at the dawn of the industrial revolution, a time when agricultural tasks were back-breaking and repetitive. Even among those people who are sufficiently benevolent to sacrifice much of their comfort for the well-being of the planet, it will be difficult to find people willing to deprive themselves of an oven, a refrigerator, a washing machine, a dishwasher, public transportation, etc. This helps to explain why the average European has daily energy needs equivalent to the volume of electricity that would be produced by more than 150 people whose main activity would be to pedal on static bicycles equipped with dynamos.

How, then, can we honour our climate goals? One popular approach today is to limit or ban certain behaviours, whether direct energy consumption or the use of the technology that generates CO2.
The ecology we defend, on the contrary, means turning any problem into an opportunity for economic development to progress towards a genuine ecological society.

Should we ban « city breaks » by plane as is now being suggested? Nobody denies that when used as fuel, kerosene significantly increases the level of greenhouse gas emissions. But a technological solution is looming; green kerosene, which could be made from water, green electricity (at a surplus during certain times of the year) and … CO2 previously captured from the atmosphere. But how can we harvest this CO2? By using large fans sucking in air which is then passed through an aqueous potassium hydroxide solution which extracts CO2, which can then be stored. For example, in Vancouver, Canada, Carbon Engineering is already on the ball. Their kerosene is ‘green’ because it is carbon neutral in terms of emissions. Since planes emit CO2, but CO2 is ‘recycled’ from the atmosphere to produce this kerosene, this creates a closed circuit, a self-feeding cycle, which will result in decarbonising the aviation sector

As another example, should the population be reduced by, perhaps discouraging the choice to have children because of the lack of agricultural land available to feed everyone? Absolutely not. Smart farming is in full development. The need for more and more agricultural land can be reduced considerably through the cultivation of fruit and vegetables in huge vertical towers or underground farms using LED lamps powered by green energy, solar panels being the obvious provider. No need for pesticides. Water is distributed in a controlled system that recycles it immediately. This process also makes it possible to produce vegetable proteins for farm animals, thereby reducing the use of large arable agricultural expanses. We could also produce, for those who wish, ‘meat’ that is 100% vegetable in origin or synthetic meat, which will simultaneously solve the problem of animal suffering. So what would we then do with all this newly liberated arable land? We would be able to create new and vast forests that could naturally capture a lot of CO2.  We can even reintroduce wild species (bears, wolves, etc.) in a semi-captive and more natural environment, accessible to the public and schools for recreational and educational means.

Of course, the development of such technological solutions requires the existence of a powerful economic and industrial engine, along with access to cheap energy, both of which are often closely linked. This energy must be fundamentally green. Thanks to the rapid progress in many sectors, we can expect, after the transition, abundant and cheap energy, especially if we develop the infrastructure needed to globalize the renewable energy market. It is already technically possible to build huge electrical interconnections, or even an international grid allowing us to access abundant solar and wind resources from which cheap renewable energy can be produced in an almost unlimited quantity. Pooling green energies at the global level also means eradicating the problems of associated production fluctuations, further reducing the costs of renewable energy.

Far from being limited to cheap green energy, this globalization will extend further to the goods, services, people and knowledge essential for this authentic ecological society. For those who opt to live in an urban environment, it could easily be in friendly, vegetated cities with permaculture on rooftops and terraces, an abundance of markets with local produce, ample space for pedestrians, clean air, bike paths everywhere, shared mobility, while these cities will also be crammed with electronics to run the vast artificial intelligence systems that optimise daily operations. The short circuit presupposes the long circuits of globalization. The collaborative economy revives conviviality and proximity but relies on digital platforms, servers, GPS, and smartphones whose countless components are manufactured and assembled in all four corners of the world.

Presciently, many science fiction writers have described futuristic societies where – as in Star Wars – a sober and almost rural way of life coexists harmoniously with the most sophisticated technology and interstellar travel. Let’s be optimistic and ambitious. Let us increase standards of life on a global scale and preserve, extend, restore, and recreate natural ecosystems everywhere.

The future will be what we can make it. Comparable, we think, to this journey on which the French poet Charles Baudelaire invited us: « There, all is just order and beauty, Luxury, calm and sensuality ». 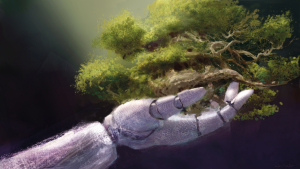