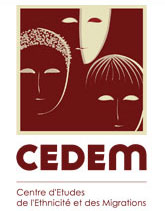 Established in 1995, CEDEM is an interfaculty center of the University of Liège designed for the theoretical and empirical study of all areas of human migration, ethnic relations and racism. It is particularly interested in the relationship between migratory processes and inequalities in development. This research is conducted with a multi-disciplinary perspective: political science, sociology, anthropology, international relations and law.

The Center also seeks to provide a forum of reflection and discussion in order to stimulate research concerning crucial dimensions such as cultural, identity and social dynamics, and their links with policy.

Through the organization of seminars and academic meetings, CEDEM also intends to, firstly, encourage the debate around different facets of migration and ethnic minorities by embedding them in an international context, and, secondly, to initiate a thorough reexamination of our analytical categories.

CEDEM: Characteristics of its approach and scientific position

The approach and the scientific position of CEDEM were formed and consolidated based on the concerns expressed in the work of its first members over the notion of power in immigration societies. As new members joined the Center and as more studies were conducted, it further developed its methods and scope.

Intellectually, the intention was never to forge a common, strictly defined theoretical position. Moreover, the diversity of qualifications, trainings, profiles, research, and points of interest of the members of CEDEM would have made that impossible. Nevertheless, with time, it is now possible to describe several connective threads among the team members that characterize the way we work, the tools we use, and our research objectives. Even if theoretical pluralism remains a key characteristic of the Center, CEDEM has forged an identity that is shared by the majority of its researchers: the political sociology of social and political change provoked by migration since the Second World War.

In terms of disciplines, the work of CEDEM is fundamentally transdisciplinary. On one hand, its researchers represent many fields. On the other hand, transdiciplinary frameworks are deliberately favored in the development of our work (research, articles, dissertations, etc.). Generally speaking, political science, sociology, history, political philosophy, anthropology, international relations and law constitute the subjects most frequently mobilized in CEDEM. However, the primary anchor remains political sociology thanks to the principle training of the founders of CEDEM, a logical anchor considering that political sociology concerns both social and collective identities (political, national, cultural, ethnic, etc.), but also the links between the social, the political and public policy.

In addition, the CEDEM takes part in academic debates in various languages, particularly French and English. In terms of its methodology, a diversity of approaches also characterizes the work of CEDEM. There is a preference for qualitative research; however, it is not exclusively so. The standard approach is to look at each project and determine what are the most appropriate methodological tools to obtain the most reliable results. Thus, in the extensive list of publications that have been produced by the CEDEM team over the past fifteen years, there is no shortage of quantitative perspectives on certain issues like, for example, subjective perceptions of discrimination. Finally, it should be noted that CEDEM has gradually developed an expertise in certain qualitative investigation techniques such as ‘focus groups’, even if the ultimate objective is not to contribute to the theoretical advancement of methodological approaches to fieldwork. Additionally, when resources permit, its researchers often undertake projects in a comparative perspective, driven by its abilities to act as a verification tool and to control for certain generalizations. Furthermore, the comparative perspective allows CEDEM researchers to avoid some of the pitfalls of what is now called “methodological nationalism”.

Given its research interests and its comparative concern, CEDEM attaches tremendous importance to the geographical dimension of its activities, from the local to the global. In other words, CEDEM develops research with local, regional, community, national, European as well as global dimensions. CEDEM, therefore, logically engages in different research networks and partnerships with similar institutions around the world, from north to south: Europe, the Maghreb, the United States, Latin America and, recently, Australia. The only Belgian center to be selected as a member of the European Network of Excellence IMISCOE, its involvement in the European research space deserves to be highlighted.

Regarding the development of links between the research community and the political world, CEDEM does not seek to intervene in the implementation of public policies. It does, however, aim to ensure that the expertise it has developed regarding these matters is made available to public authorities for their policy choices and implementation by disseminating its knowledge as widely as possible. The policy advice based on research produced by CEDEM should not be confused with consultancy, or giving an opinion on an issue without undertaking proper scientific research. In other words, CEDEM has deliberately chosen to advocate politically relevant scientific research over consultancy work. In addition, partnerships with civil society, non-governmental organizations, associations and the media are also at the heart of our concerns. The scientific studies of CEDEM strive to be helpful for civil society. It is important, therefore, to make our findings available to interested individuals and organizations, which is what we attempt to do through our publications and our regular participation in round tables, conferences, seminars, etc.

Finally, even if the research themes are many, from the governance of migration and cultural diversity to citizenship, Islam, and other social and political movements, via racism and xenophobia, the spotlight usually shines on the city. It is at the urban level that migratory and ethnic dynamics are the most significant, making urban environments and neighborhoods the ideal research terrain for the accumulation of knowledge regarding all of these questions.